The locust crisis has now reached 10 countries and is expected to carry on to endanger millions more people. The Food and Agriculture Organization of the United Nations (FAO) is further scaling up its activities to fight the Desert Locust upsurge in East Africa thanks to a $10 million loan from CERF. This loan will supplement the $10 million grant that CERF contributed to FAO in January to fight the outbreak which is threatening to provoke a humanitarian emergency in the region.

The CERF loan will be used to further scale up the desert locust control operations through procuring pesticides, hiring helicopters and aircraft, purchasing vehicles with spray equipment and conducting environmental impact assessments in the worst affected countries - Ethiopia, Kenya and Somalia.

According to FAO, the Desert Locust is considered the most destructive migratory pest in the world. A swarm covering one square kilometre contains 40 million locusts that can eat the same amount of food in one day as 35,000 people. 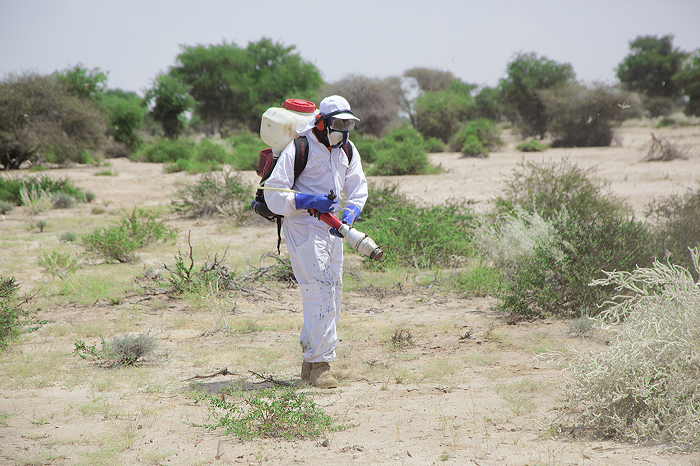 FAO's Desert Locust Information Service says it is the worst outbreak to strike Ethiopia and Somalia for 25 years and the worst infestation that Kenya has experienced in 70 years. Djibouti and Eritrea have also been affected. Swarms have been reported in Bahrain, the Republic of Iran, Iraq, Kuwait, Oman, Saudi Arabia, the Sudan, Qatar, United Arab Emirates and Yemen, as well as India and Pakistan.

FAO stresses that the situation is extremely alarming in East Africa, a region where 20 million people are already considered food insecure. There, the swarms have laid eggs and in a few weeks' time, these will mature, and start to eat crops - right at the start of the region's main agricultural season.

Pasture and croplands have already suffered damage in Djibouti, Eritrea, Ethiopia, Kenya and Somalia, and there are potentially severe consequences for the region where millions rely on agriculture and livestock rearing for their survival.

With the growing spread of the locust outbreak, FAO recently raised its appeal to $153 million to assist the countries that have been impacted - Djibouti, Eritrea, Ethiopia, Kenya, Somalia, South Sudan, Uganda, the United Republic of Tanzania. This also includes $15.2 million for the potential threat posed by the pests to the Sudan and Yemen. So far around $107 million have been pledged or received from donors so we urgently need to fill the gap.

For more information on the appeal and ongoing response, please click here.