UN Humanitarian Chief Mark Lowcock has allocated US$2 million from CERF to provide life-saving assistance to civilians caught up in the escalating fighting in Libya, including vulnerable migrants and refugees.

“I am deeply concerned by the escalation of fighting in Libya. In the past 24 hours, Tripoli witnessed the worst violence against civilians since 2014, with several densely populated neighbourhoods hit by indiscriminate shelling,” said Lowcock. “The impact of explosive weapons in populated areas is devastating. I urge all parties to refrain from the use of weapons that put more civilian lives and infrastructure at risk.”

Seventy-four civilian casualties have been verified since the start of the current hostilities, including 18 deaths, over the past two weeks. First responders and medical staff doing their jobs have been among the casualties.

“The CERF funds will help hospitals and health clinics attending to the injured immediately get the emergency medical supplies they need, including surgical and trauma kits. The money will also allow aid agencies to provide food and relief items to displaced people and support the safe relocation of vulnerable migrants and refugees from detention centres in areas where airstrikes have been reported.”

On 16 April, over 4,500 people were forced to flee their homes, according to the International Organisation for Migration, bringing the total number of internally displaced people to 25,000. That is the highest single-day increase in displacement in and around Tripoli and the number is expected to increase. 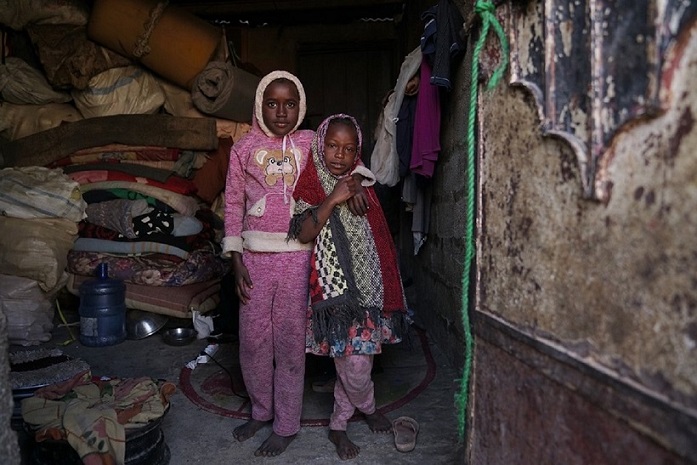 Two young girls pose at the door of their shack in Alzara'eeah, Benghazi. Credit: UNOCHA/Giles Clarke

Aid organizations are responding to the rapidly increasing humanitarian needs wherever access allows, while people trapped in conflict affected areas are reportedly running low on basic food items, fuel, and experiencing prolonged electricity and water cuts. Requests for a temporary ceasefire to allow civilians to safely and voluntarily leave conflict affected areas have not been adhered to.

“I urge all parties to the conflict to meet their obligations under international humanitarian law to protect civilians and civilian infrastructure, and to allow unimpeded and sustained humanitarian access to the affected areas,” said Lowcock, noting that there is an urgent need to evacuate more of the most vulnerable people.

Low funding also continues to hamper the humanitarian response with just six per cent of the US$202 million required in the 2019 Libya Humanitarian Response Plan received.

“This CERF allocation can only support the immediate response to the most pressing needs. In light of the rapidly deteriorating situation, additional funding is urgently needed,” said Mr. Lowcock. “If fighting moves to central Tripoli, an even greater surge in humanitarian needs is expected and humanitarian organizations will need to scale up considerably.”