Share:Share on FacebookShare on TwitterShare on Linked In
Marco Prates

ONDJIVA, Angola – Pedro Henrique Kassesso knows people can be a little skeptical when he tells them how old he is, so he doesn’t mind showing them the ID card bearing his date of birth. According to the document, Pedro was born in 1907, a claim his neighbourhood coordinator confirms. So, when he says that the drought currently ravaging the area is the worst he has ever seen, it’s worth taking note.

“Water is the world’s boss,” the 112-year-old Pedro says. Unfortunately for large parts of southern Angola this year, it is also nowhere to be seen.

From bad to worse

An estimated 2.3 million people are affected by the ongoing drought in southern Angola’s Namibe, Huila, Bie and Cunene provinces, nearly half a million of whom are children under 5 years old.The failure of this year’s rainy season in the first three months of the year decimated crops and livestock. In Cunene province alone, the number of people facing food insecurity more than tripled in the same time period, from almost 250,000 in January to more than 850,000 in March. The water scarcity has also had a dangerous knock-on effect on children’s education.

During the dry season, men usually embark on the seasonal movement of their livestock, known as transhumance. In most cases, it is up to the children, women and the elderly who stay  behind to fetch water for the family and take care of the household and smaller animals such as goats and chickens. But the increasingly arduous journeys in search of water have left little time for school.

Of Cunene province’s 887 primary schools, 614 have been affected by the drought in some way, seriously disrupting the education of around 70 per cent of the province’s 214,000 students. Rogério Kakoi, director of Ondobodhola Primary School, says that the drought is taking a toll on education even when children do make it to class.

“Students no longer have any energy and aren’t really learning much,” he says. “I have students who have to get up at 1 a.m. to take animals somewhere for water, and they don’t get back home until 5 a.m.” It’s not surprising that 20 per cent of the school’s students have dropped out since the beginning of the year, or that physical education classes have been cancelled: there isn’t enough water to give to children who would be exercising.

Fourteen-year-old Naime Cekupe is one of the young people  whose education has been disrupted by the drought. She wants to be a teacher one day. But right now, her chores mean she is regularly forced to miss school.

Every other day, Naime and her sister Launa Hambelezeni take the family’s goats to find water to drink. That journey means a 90-minute walk to and from the family well, as well as several hours trying to extract water once they get there. On those days, there simply isn’t time to attend  classes. 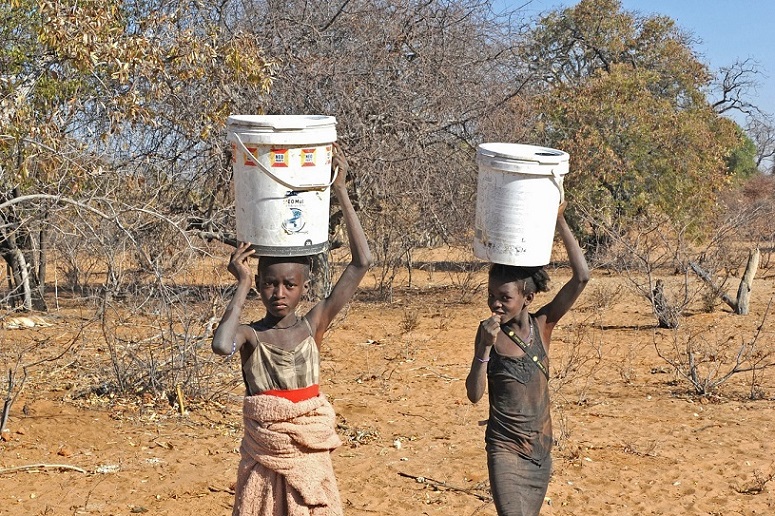 UNICEF/Carlos Louzada. Onyevetu Laitia, left, and Marta Ndimaoshitya, have to walk for over an hour each day with 20-litre buckets to fetch water for their families.

The search for water

The daily reality in these southern provinces is a stark reminder of just how challenging it is to access water, even when a well is available.

Eighteen-year-old Tchirinho Vataleni's family shares a more than 15-metre deep well with five other families in Ombadja. Each day, he spends around four hours down a cold, dark hole using a bucket to remove enough soil from the bottom of the well to access water.

Tchirinho doesn’t have access to safety equipment either, so he climbs down with his bare hands. Sometimes, even a full day of digging doesn’t pay off.  On bad days, there might only be enough for each family to take home a single bucket with 20 litres of water.

Ana Leonilde, 24, has experienced this very challenge herself. After spending more than three hours digging in a well, the clay walls started to collapse, forcing her to start all over again. “This water is bad, too salty,” she says. “But you have to keep fighting for water or you don’t drink or eat.”

With help of CERF funding, UNICEF is supporting the government of Angola to provide Cunene with 30 water tanks with a capacity of 5,000 litres each, which will be placed at strategic locations in drought-affected communities to reduce the distances communities have to travel to fetch water. Funds are also helping to provide nutrition and sanitation to more than 300,000 children.